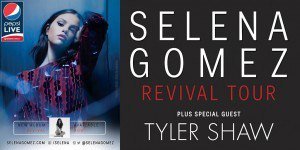 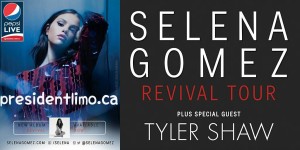 Limousine Vancouver announced multi-platinum singer and actress Selena Gomez will embark on her worldwide “Revival Tour” in 2016. The first leg will find Gomez traveling to 41 cities across the United States and Canada. The tour will kick off in Las Vegas on May 6th at Mandalay Bay and will hit major markets including Brooklyn, Los Angeles, Chicago, Boston, Dallas, Toronto, Montreal, Vancouver and more. Additional international territories and dates are expected at a later time. Tickets for “The Revival Tour” go on sale starting Saturday, October 17th at 10:00 AM via Ticketmaster.com

Limousine Vancouver will be taking clients to the concert. to book 604-356-9600 or bookings@presidentlimo.ca